FizViz began life as a “concept” project when we decided to enter the World’s Largest Arduino Maker Challenge, an event sponsored by Arduino, Microsoft, and Hackster.io.

The original goal was to make it possible for a wider group of people to have access to analytics data, and to make really high profile analytics “front and centre” for folks in an office environment.

Specifically, we had launched our SIGNUL beacon product a year or so earlier, but really, nobody in the IoT Shop had access to the analytics being generated. We thought it would be cool to have large wall-mounted visualization widgets that could be hooked up to our stats – number of visitors to our on-line store, web site hits, etc.

Many whiteboards were harmed in the production of the FizViz.

A variety of different form factors were considered over a number of brainstorming sessions. In the end, we agreed that likely “FizViz” was a family of widgets – different data would need different physical form factors. Some could be expressed on a rotary dial, some was linear, maybe there would be heat maps, and so forth.

Practicality dictated that we’d probably be able to build out only one for the contest, so we decided on a rotary dial that we called the “Roto-moto”. And…. so began the quest.

Anything called the “World’s Largest Arduino Maker Challenge” is both a bit daunting and enticing all at once. As it turned out, Arduino and Microsoft were very excited to announce the release of the MKR1000, which was a brand new board for Arduino, featuring on-board WiFi support, which allowed the board to connect to services such as the Azure cloud and other online data points.

This, obviously, was quite perfect for us – we needed to be able to grab data from the Internet in real time in order to update our widgets, and the WiFi connectivity of the board allowed us to use Microsoft’s Remote Arduino Library and Firmata to exchange data between the MKR1000 from a Surface Tablet without having to dive too deep into the guts of data transfer.

Because there were bonus marks on the table for integrating Azure and Microsoft connectivity, we did our best to leverage all of the options available. It turned out to be a pretty good experience in terms of evaluating and leveraging tech like Remote Arduino and Firmata, so no complaints. 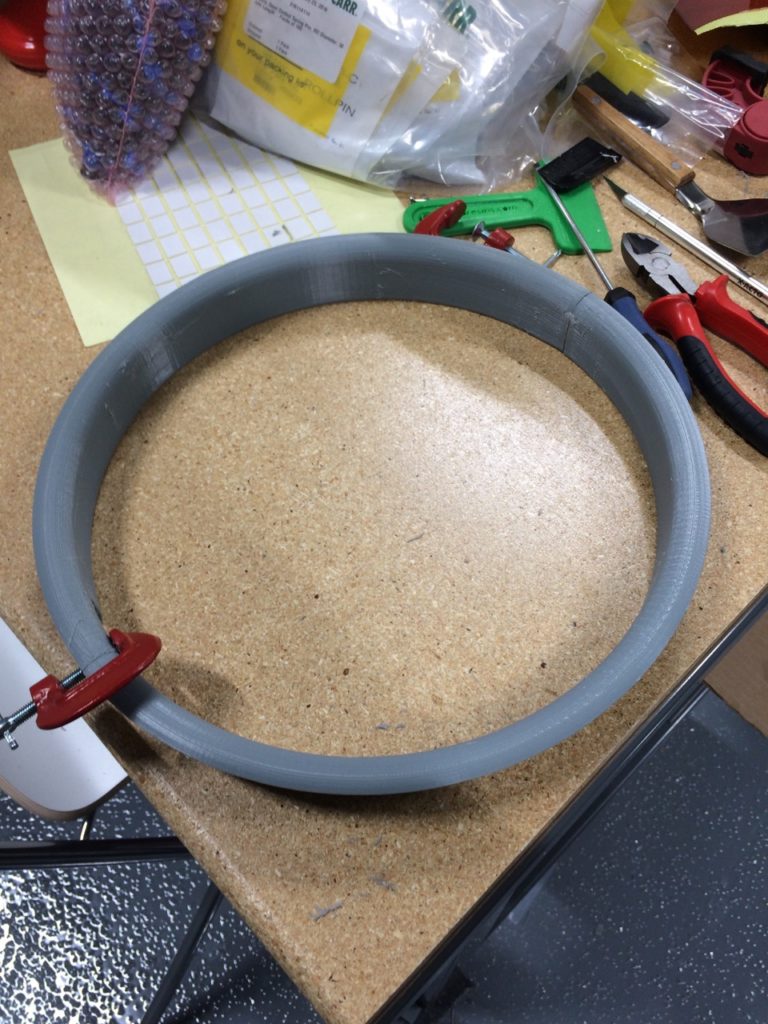 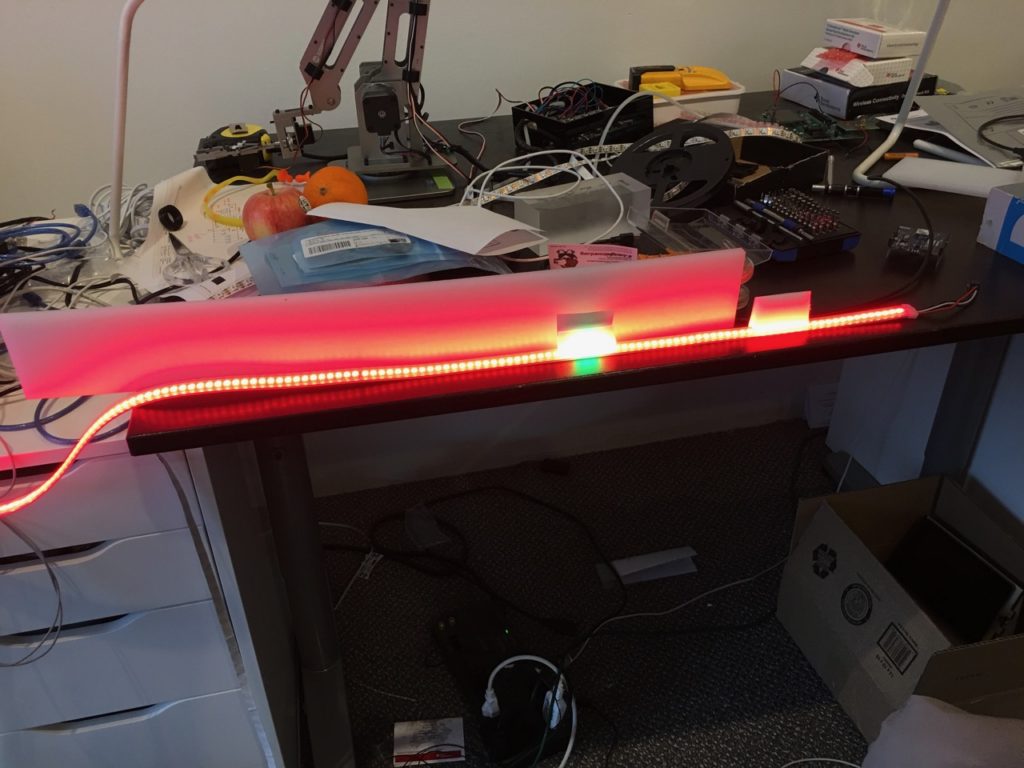 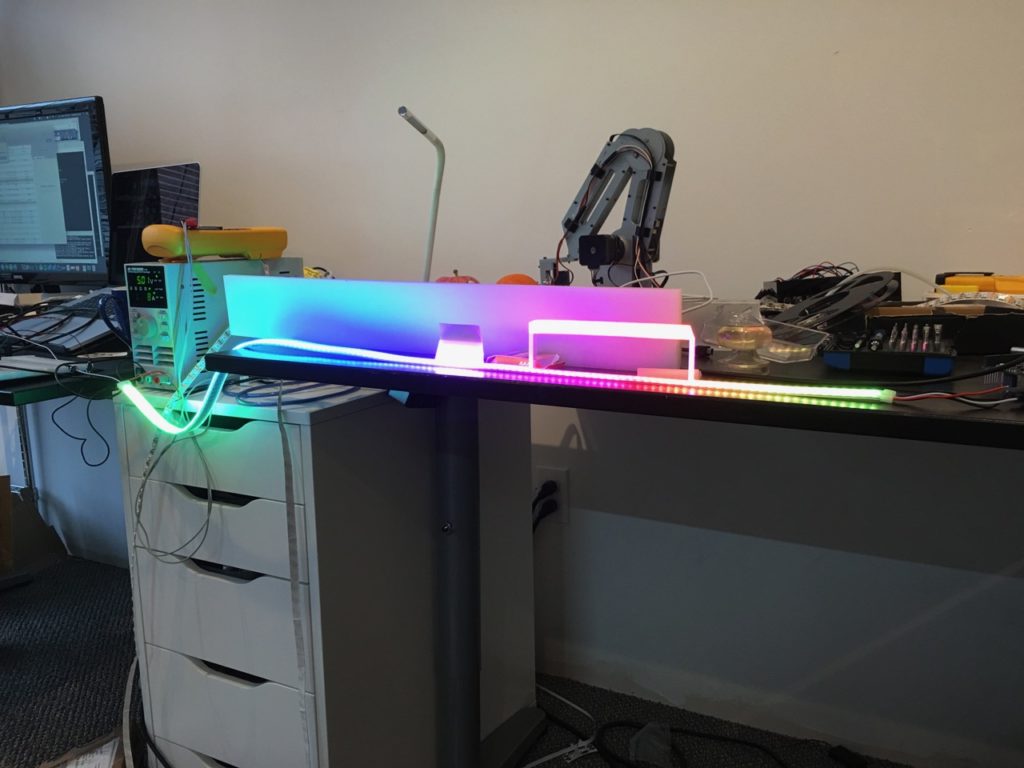 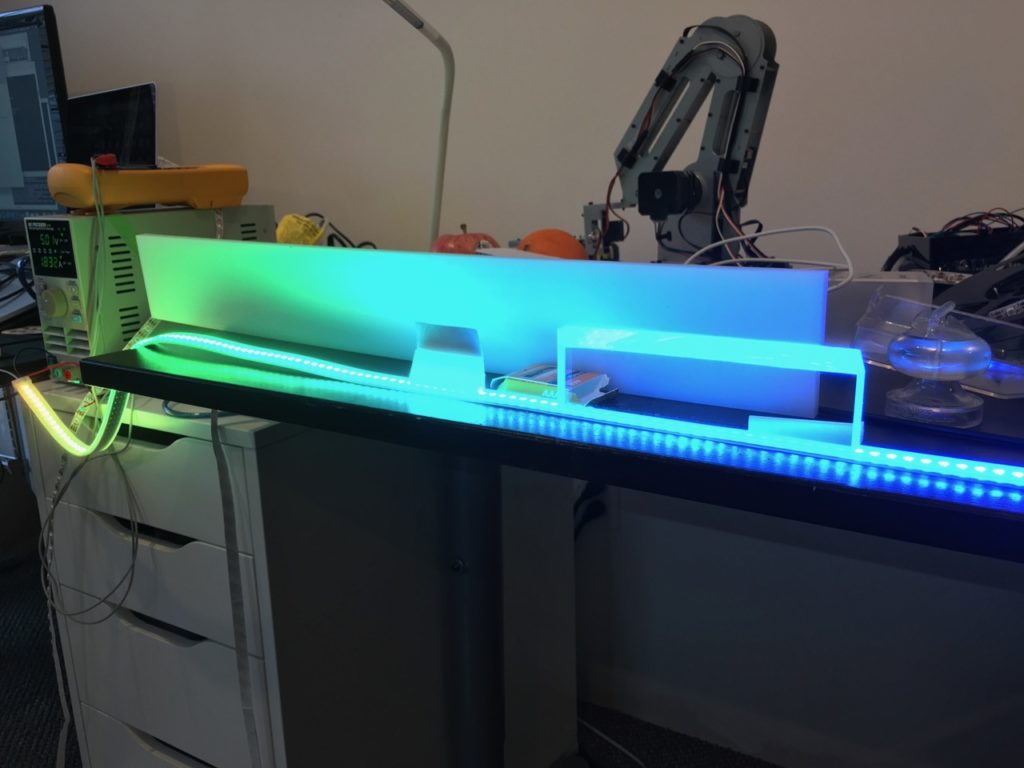 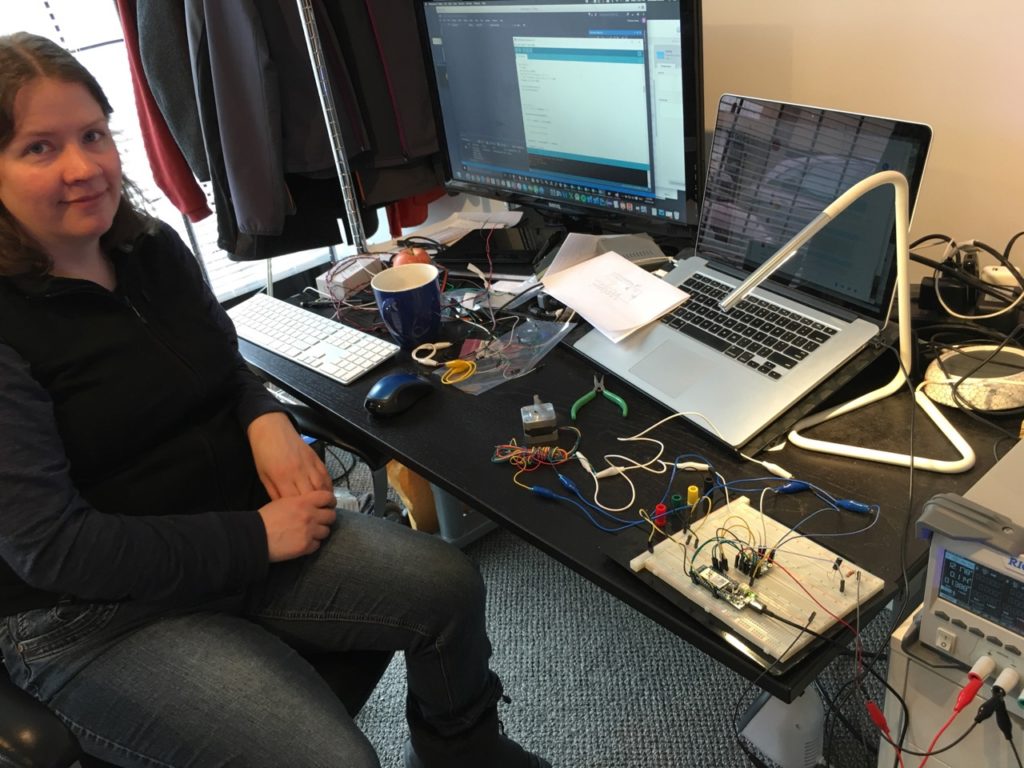 Chelsea Breadboarding the Guts of the FizViz with MKR1000 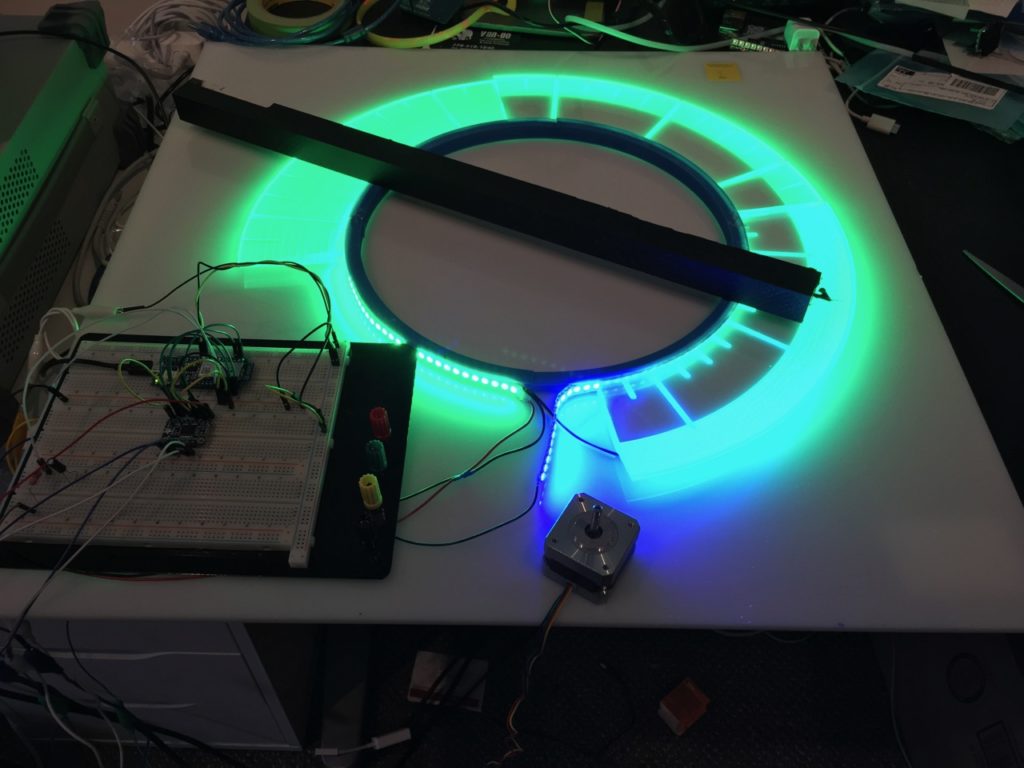 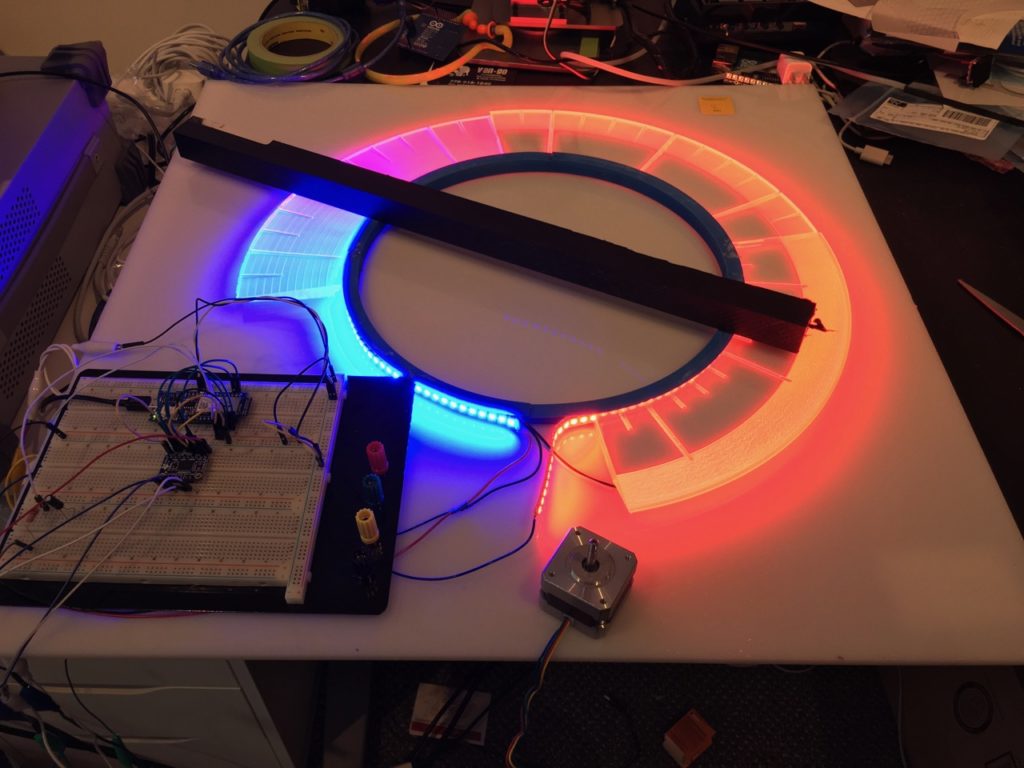 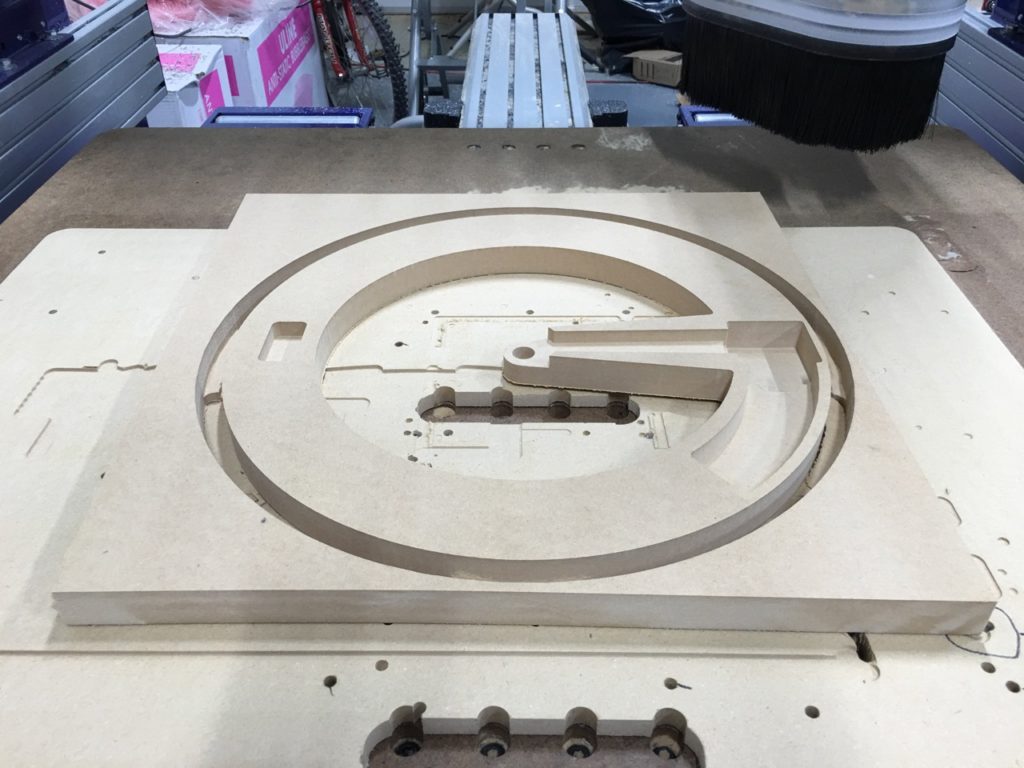 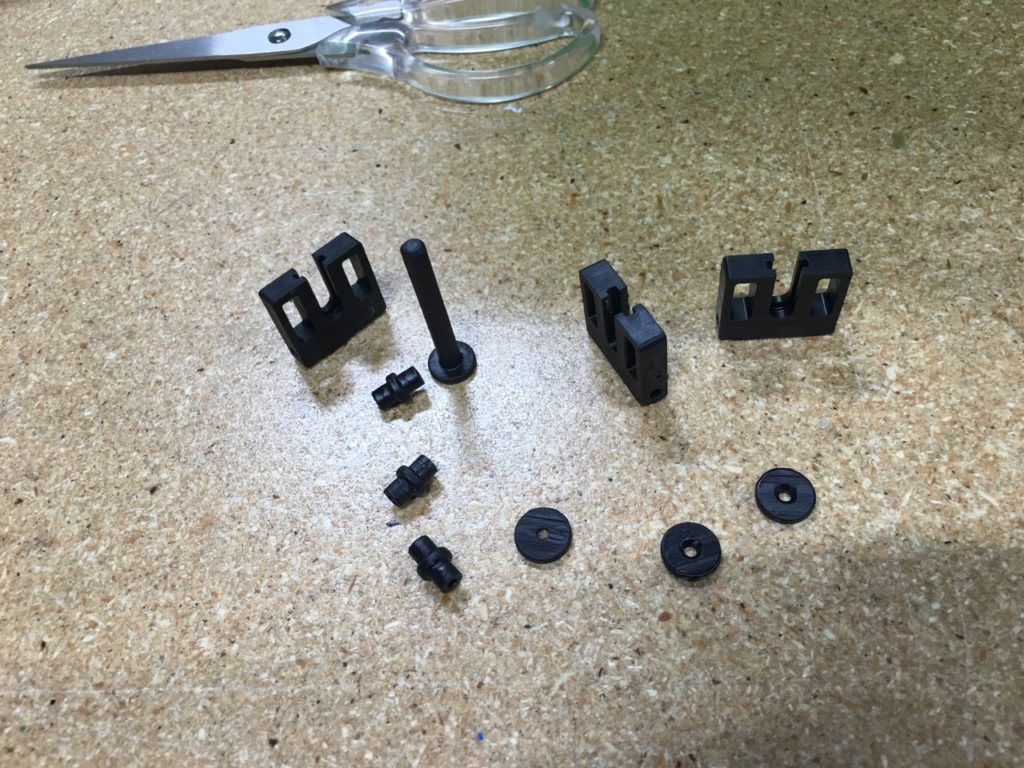 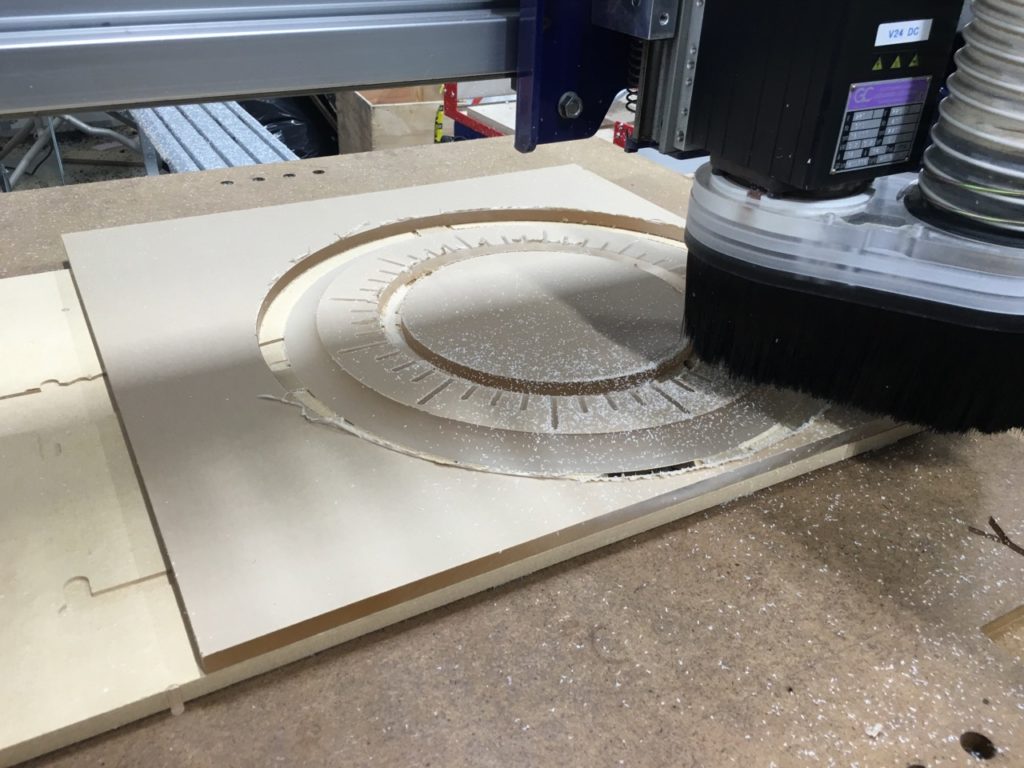 Test Run of the CNC'ed Bezel 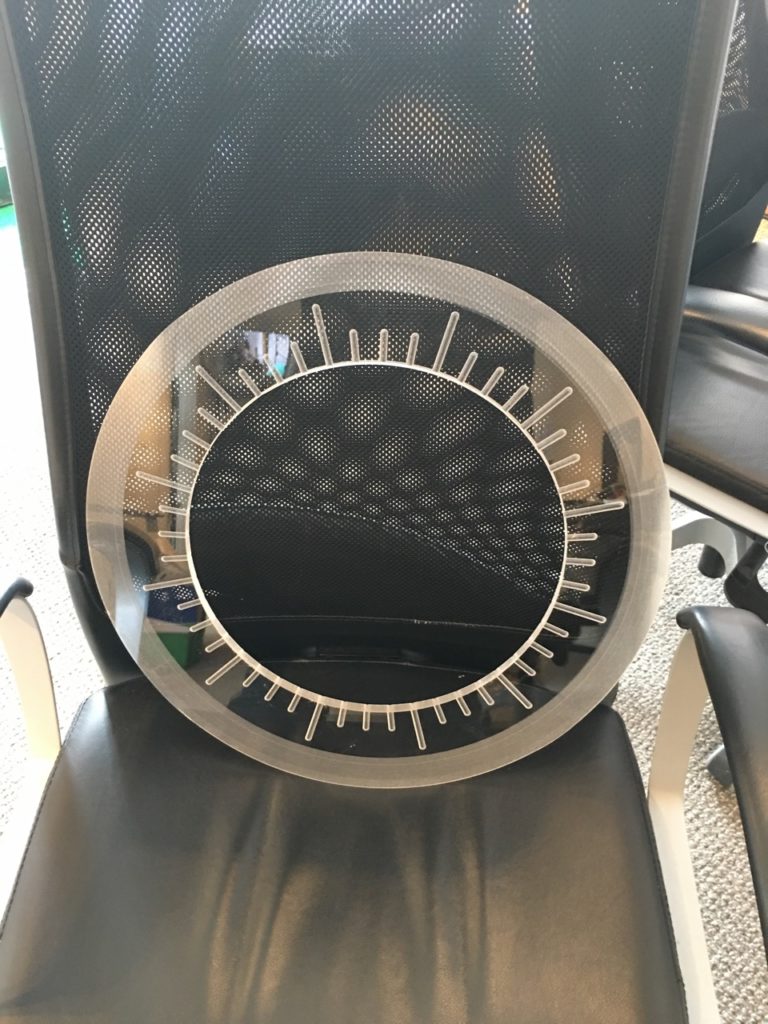 An Acrylic Version of the CNC'ed Bezel 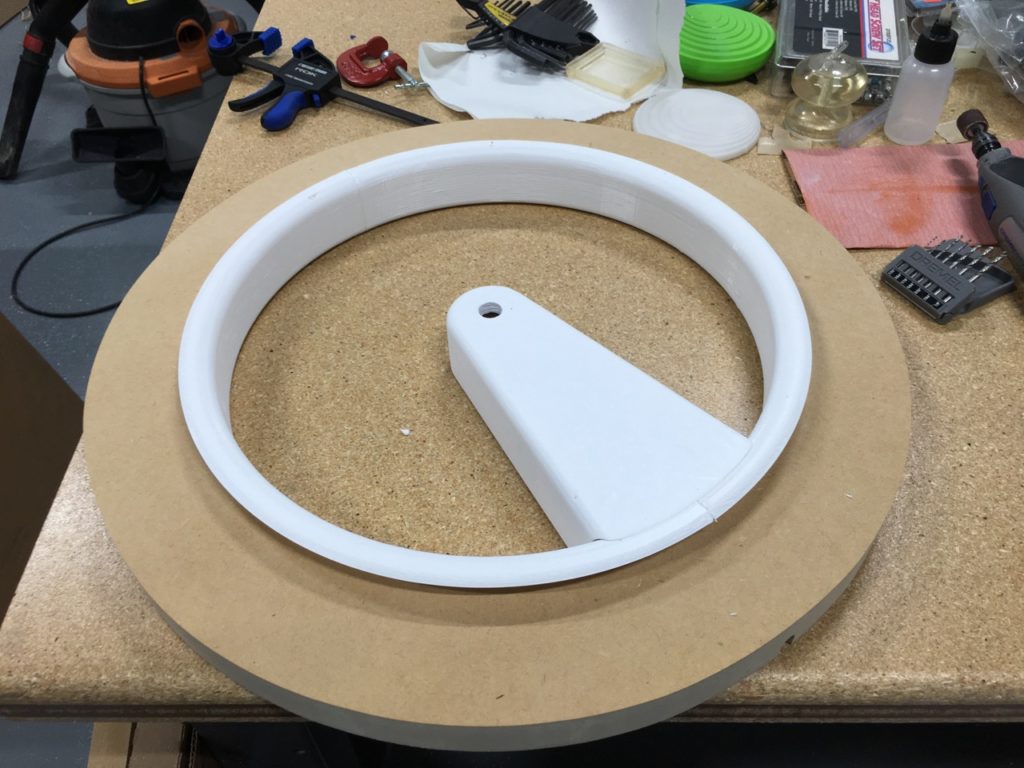 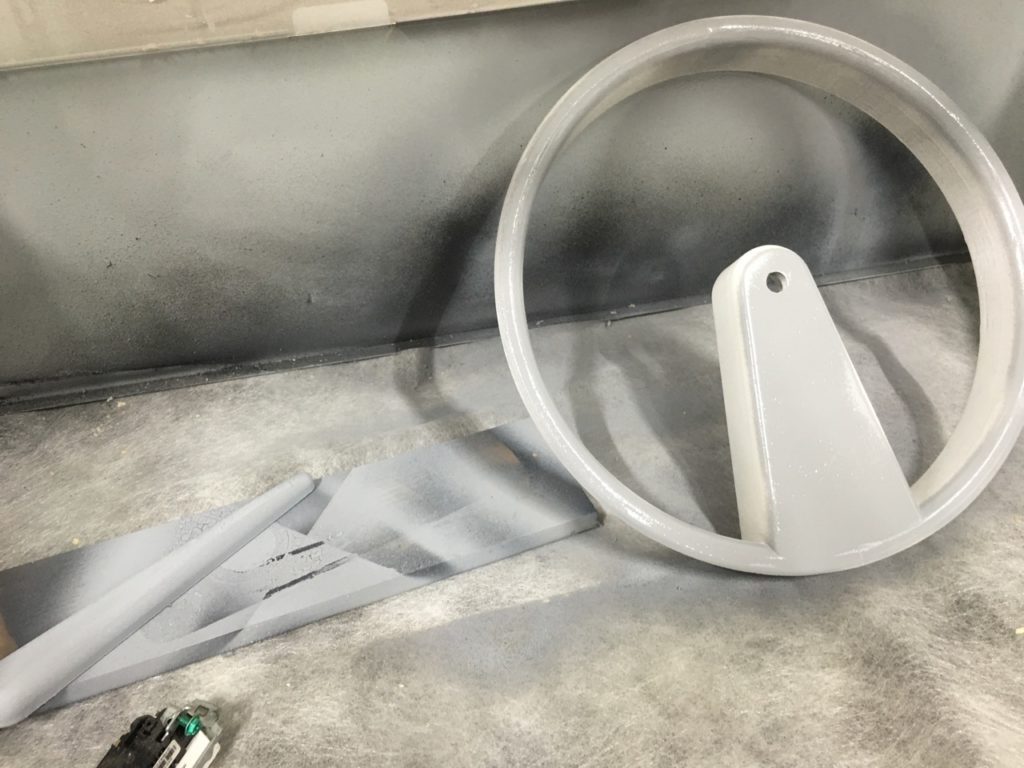 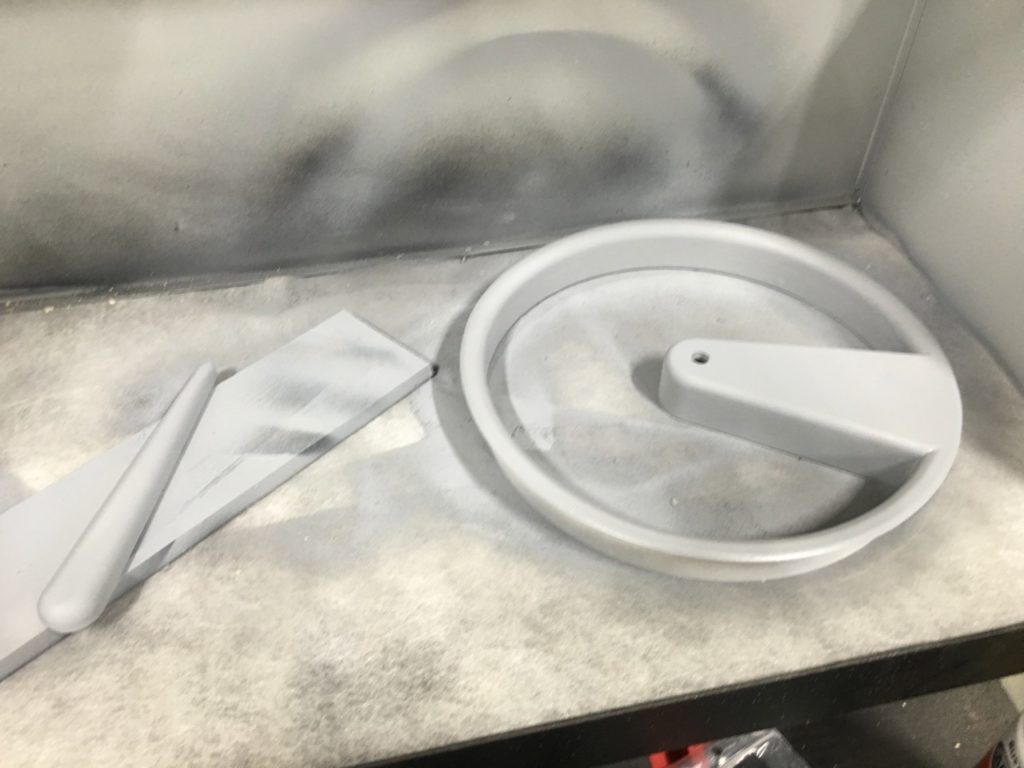 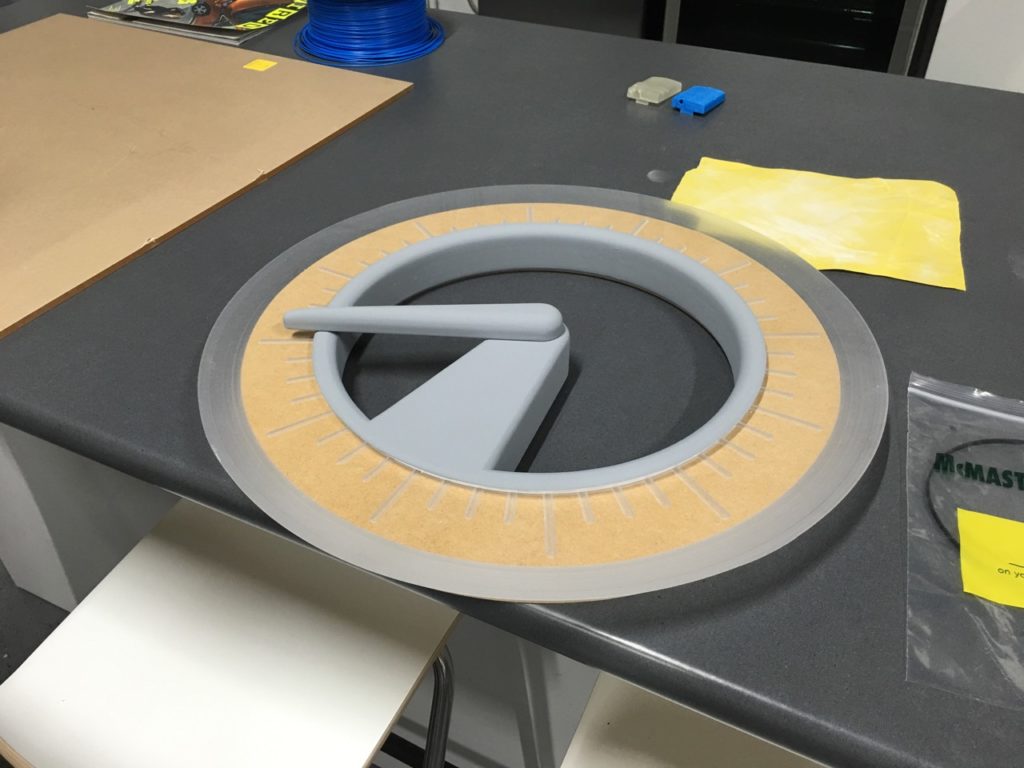 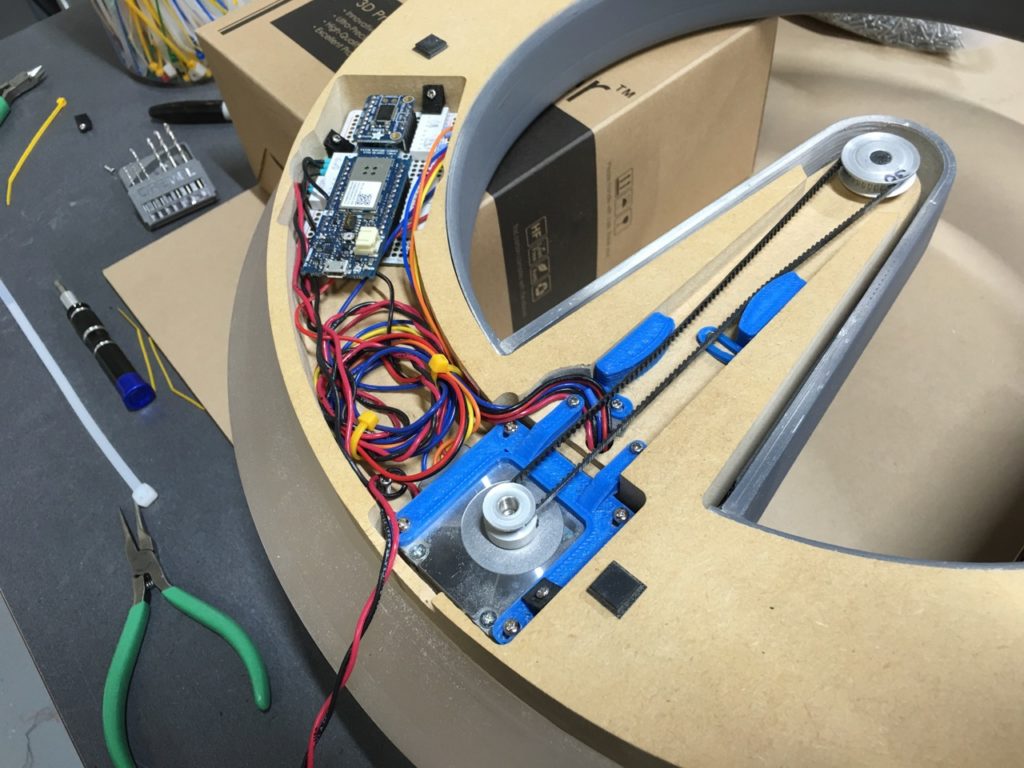 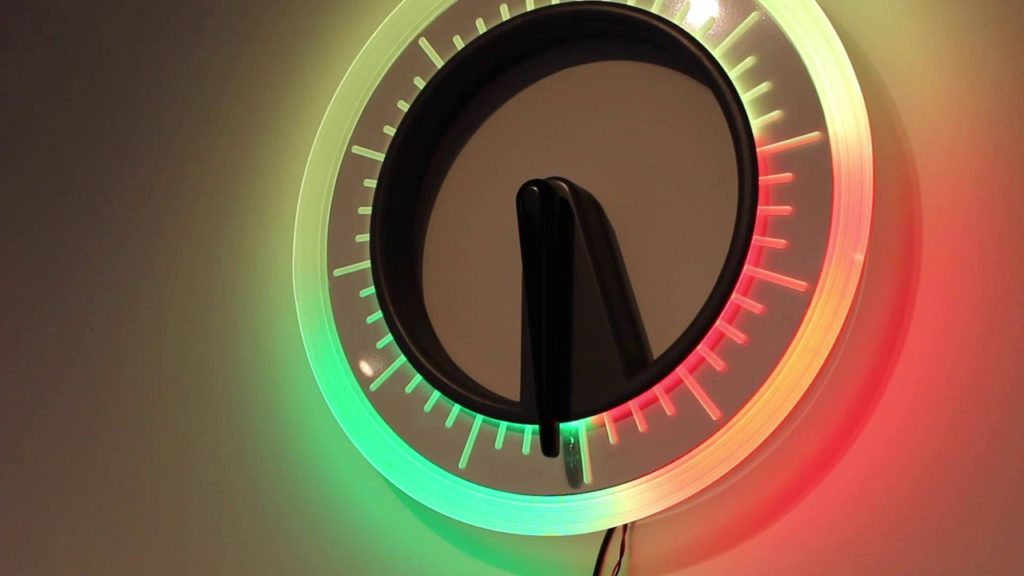 Once we had our general concept in hand for the Roto-Moto, we had a lot of experimenting to do. In the past, we had done a couple of experiments with edge-lit, CNC milled acrylic to create a lot of really interesting lighting effects. Basically, when you shine LED light in from NeoPixels or other such high intensity light sources, anywhere that you’ve milled the acrylic creates a bright edge that refracts bright colour. Anywhere left clear stays clear and does not refract.

After a few tests with different angles and parameters, we settled on the design for the clear bezel that is really the “highlight” of the Roto-Moto FizViz. Everything else was built around that. On our original large-format design, the needle on the gauge was belt-driven, and required a bit of mechanical work to get the pulleys and belts incorporated.

Once mechanicals were sorted, we leveraged all the machines and techniques available to us in the IoT Design Shop:

We used one of our favourite tricks to finish the 3D printed parts into a glossy finish – a generous application of Rust-Oleum Filler Primer, and some elbow grease with fine pitch sand paper. This allowed us to finish the bezel and needle to a shiny finish once we applied colour and clearcoat.

After submitting our project to Hackster.io for the challenge, we waited…. and waited…. and then the contest deadline got extended. Finally, some hints started to trickle in – one of the most exciting was that our heroes at Adafruit featured FizViz on their blog. This was almost like winning the prize, as we’ve been long time admirers of Lady Ada and the Adafruit movement!

Then, we got notification that we had won Best Project – USA,  World’s Largest Arduino Maker Challenge! It was exciting and humbling all at once.

Grand prize was a trip for the team to Bay Area Maker Faire 2016 plus $500 from Adafruit which we’ve featured in another blog post.

We’d like to once again thank Adafruit, Hackster, Microsoft, and of course Arduino for the honour to participate in the contest, and for their sponsorship and recognition in the World’s Largest Arduino Maker Challenge.

Trent and Steve catching up with our hero Massimo Banzi from Arduino.